Want a Paycheck Advance? Consider the Pros and Cons First

March 21, 2017 – 09:53 am
Stratospheric interest rates: Now let's get to interest rates, which are usually the most critical part of any loan. Right now, we're in a period of historically low rates and 30-year fixed-rate mortgages can be found with interest rates of about 4%. The average rate on a credit card is between 13% and 16%, with maximums near 30%. What kind of rate can you expect from a paycheck advance? Well, the CFPB has pointed out that, "A typical two-week payday loan with a $15 per $100 fee equates to an annual percentage rate (APR) of almost 400%." Imagine that - if your loan was left in force for a whole year, you'd end up paying four times its value just in interest! There's a word for this: usury - the practice of lending money at unreasonably high rates of interest. Remember that 400% is a typical rate, and some lenders charge 500% or more. (Another term frequently associated with these loans: "predatory lending.")

Extreme collection methods: OK, let's say that you're cool with the fees and the interest rates. What if you can't pay off your loan on time? Well, if you take the time to read the fine print in the contract you agree to, it (unsurprisingly) favors the lender, not you. Every paycheck advance company has its own policies and methods, with some more savory than others. In their attempts to get their loan repaid, it's not unheard of for these lenders to make calls to your workplace, to call your family members, and even to make threats. The line between legal and illegal collections methods is not always recognized. 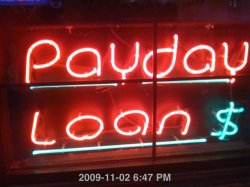 Nasty consequences: Another result of not being able to repay your loan on time is that your loan can get "flipped, " becoming a new loan, with new terms and new fees. With payday loans, the amount you owe tends to rise quickly. This is a big deal because anyone who is desperate enough to need a paycheck advance is likely not on the soundest financial footing, and suddenly owing much more than you expected to is supremely counterproductive. A 2013 CFPB report noted that the median number of days borrowers were indebted annually was 199 - more than half the year! Another nasty consequence is that borrowers will sometimes give lenders access to their bank accounts, only to then have the lender making withdrawals for interest while not reducing the loan balance. Or making withdrawals that result in new fees charged by the bank. If this happens to you, you can contact the bank and revoke withdrawal authorization for the lender.

Hacking: As if the issues above aren't enough, those who seek paycheck advances online have increasingly been targeted by hackers. With many states cracking down on brick-and-mortar payday lenders, many borrowers are looking to online sources of loans. That requires entering a lot of personal information into these lenders' databases, though, such as names, addresses, Social Security numbers, driver's license numbers, bank account numbers, and more. This kind of data is a goldmine for identity thieves.

Alternatives to paycheck advances
Fortunately, most people in financial dire straits do have some other options besides payday loans:

There are a few situations in which a paycheck advance can make sense, such as if you're dealing with a lender who has very reasonable terms and you're very certain that you will be able to pay back the money on time. Otherwise, look elsewhere for financial relief, lest you make a bad situation worse.

So what is a paycheck advance Reno? Find out here!

Getting A Paycheck Advance Online The Smart Way

Using QCFs to Advance Your Career & Double Your Paycheck ...

@KRStaley rubs my lil hands together is this a thing i can do? my paycheck comes friday so i ask in advance
Thu, 18 February 2016 04:51 AM