Free Money for Everyone by Ryan Cooper 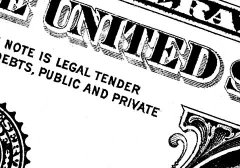 A wacky-sounding idea with surprisingly conservative roots may be our best hope for escaping endless, grinding economic stagnation.

How would you like to get $2, 000 in free money today, fresh off the government printing presses? And what if I told you it wouldn’t just be a nice windfall for you and your friends and family, but that we’d do it for all Americans on an ongoing basis, and that doing so would solve our crippling problem of mass unemployment?

I know what you’re thinking: it would be crazy. Either it would be a fast track to crippling inflation or it’s some Republican satire of an ultra-liberal government handout program. But it is not quite as radical as it sounds. The key idea behind such a program has a longstanding, bipartisan economic pedigree. John Stuart Mill argued in 1829 that mass unemployment was caused by “a deficiency of the circulating medium” relative to other commodities. John Maynard Keynes used the idea in his 1936 book, The General Theory of Employment, Interest and Money, to lampoon the inherent silliness of gold mining, suggesting that old coal mines could be filled up with bottles full of banknotes, buried over with trash, then left “to private enterprise on well-tried principles of laissez-faire to dig the notes up again.” Milton Friedman suggested that monetary policy could never fail to cure mass unemployment, because as a last resort the central bank could just drop cash out of helicopters—an enticing analogy that former Federal Reserve chairman Ben Bernanke borrowed in a 2002 speech, earning himself the persistent nickname of “Helicopter Ben.”

And it hasn’t just been theorizing. In 2008, George W. Bush and Nancy Pelosi engineered the tax rebate stimulus, in which everyone received a check in the mail—paid for, eventually, with fresh new money. Studies have found that this stimulus worked quite well; it was just overwhelmed by the Great Recession, and we only received checks once. Mill, Keynes, Friedman, and even Bernanke might argue that we should revive a similar stimulus again—only this time, on a much bigger scale, and on an ongoing basis.

Why? Because the economy has evolved to a point where it is vulnerable to mild depressions. In fact, the one we’re in now could persist for decades, as similar conditions have in Japan and other countries. In order to avoid that slow, painful outcome, we need a policy that will jump-start our economy. After three straight years of political gridlock it’s clear that Congress is not going to provide the fiscal stimulus we need, and while the tools the Federal Reserve has at its disposal have helped, they’ve not done enough.

If Congress could be persuaded to give the Fed a new tool, one that would let it distribute purchasing power to the broad mass of the population—to “drop money from helicopters, ” so to speak—it might be enough to help us escape the nightmare of slow growth and persistent unemployment we’re in now.

The key economic idea undergirding this policy idea is something called aggregate demand, which, stated simply, is the total amount of spending in the economy. During a financial crisis, aggregate demand goes down, since newly unemployed workers have less money and people who manage to keep their jobs reduce their spending out of fear. When people spend less money, sales fall, and businesses are forced to lay off workers, who then spend even less money, and so on. In other words, money goes in circles: my spending is your income, and your spending is my income. If we all simultaneously cut back on our spending—if aggregate demand declines—then everybody’s income declines, too. That is, very crudely, what happened during the Great Depression, when there were millions of perfectly able workers desperate for jobs, while perfectly functional factories lay idle due to lack of customers. It’s also what has been happening, to a milder degree, in our economy since the 2008 crisis.

While depression economics has many strange features, the most important one to remember is this: with slack in the economy, it’s possible to have an economic free lunch. If our economy were running at capacity, new government spending, for example, would tend to create inflation because the capacity (workers, raw materials, and equipment) would have to be bid away from someone else, thereby raising prices. But during a depression that doesn’t happen. Instead, new spending brings idle capacity into production. To put that another way, the single-most-important underpinning of a functioning economy is to ensure that there is sufficient aggregate demand.